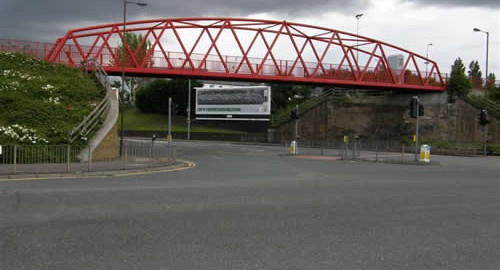 Police in Edinburgh are appealing for witnesses following a knifepoint robbery in the North of the city.

The incident happened around 1.30pm today  in the Drylaw area.

A 30-year-old man was walking on the cycle path between the red bridge on Ferry Road and the rear of the Morrison’s supermarket when a male approached and presented a knife.

The victim was then threatened and robbed of his rucksack before the male made off.

Anyone who can assist police with their investigation is asked to come forward.

The suspect is described as white, early to mid-twenties, 6ft tall with an unshaven complexion and a pronounced Adam’s apple. He was wearing a navy blue hooded top with zipper and white drawstrings, navy blue and white scruffy trainers

“Fortunately the victim was unharmed but is obviously very upset at the theft of his rucksack and was left shaken by this incident.

“Anyone who remembers seeing any suspicious activity in the area is asked to contact police immediately.

“In addition, anyone who recognises the description of the suspect is also asked to get in touch.”

Those with information can contact Police Scotland on 101 or alternatively, the charity Crimestoppers on 0800 555 111