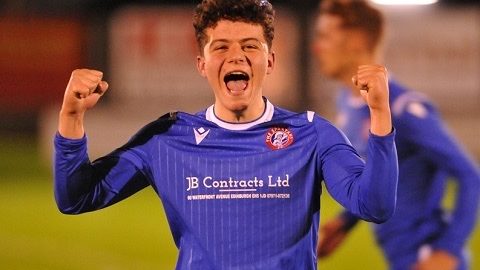 Spartans are into the second round of the Scottish Cup after winning last night in Aberdeenshire.

Dougie Samuels men made the long trip north to Banff after Saturday’s game was postponed due to flooding.

Teenager, Nicky Reid, was the Spartans hero on the night after scoring in the 90thminute to book Spartans place against Queens Park later this month.

After the game Reid said “It’s unbelievable to come here after such a long journey and especially after Saturday being called off and score the winner it is really unbelievable.

“It means everything to me to score and I done it for the team.

“It was an excellent team performance from the boys.

“I am now buzzing for the next round.”

Aaron Murrell fired the Ainslie Park side ahead midway through the first half with an unstoppable strike that nestled low in the net.

Just as it looked like the game was heading into extra time Reid was played in by Murrell and the 17-year-old calmly slotted the ball into the back of the net.

Spartans finished the game with ten men after skipper, Adam Corbett, was shown a straight red card near the death.