SSPCA appeal for information after two cats abandoned in Muirhouse 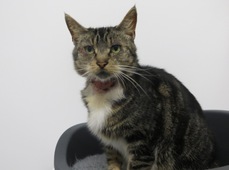 The Scottish SPCA is appealing for information after two cats were abandoned in a stairwell at a block of flats in Muirhouse.

The cats were rescued yesterday after they were discovered on the 11th floor of Fidra Court.

The male and female cats are now in the care of SSPCA’s Glasgow Animal Rescue and Rehoming Centre.

“Sadly it seems the cats were abandoned as we’ve not been able to identify anyone in the stairwell they might belong to. The male cat is in okay condition but the female has a very nasty wound on her neck where a makeshift collar has been rubbing against her skin. They are exceptionally friendly cats and the vet has estimated them to be around six years old.

“If anyone has any information we would ask them to get in touch. We’ll soon find these lovely cats a suitable new home.”

Anyone with information is being urged to contact our Animal Helpline on 03000 999 999. North Edinburgh Community News will happily pass on any information.